Derby County midfielder Bradley Johnson has been charged with violent conduct by the Football Association after appearing to bite Stoke’s Joe Allen.

The alleged incident happened during a clash with Allen in their Championship game last night, which the Potters won 2-1.

However, Allen has said he doesn’t believe Johnson bit him.

The FA have indicated a 3-match ban, which would usually apply, will be insufficient if Johnson’s found guilty.

He has until 6pm tomorrow to respond to the charge.

sean of the dead leg

Scott Brown on the bench: Rosenborg vs Celtic preview and confirmed teams

There was an incident between the two players in the midst of a scuffle sparked by Peter Etebo’s challenge on Richard Keogh.

Images appeared to show Johnson trying to sink his teeth into Allen’s shoulder. 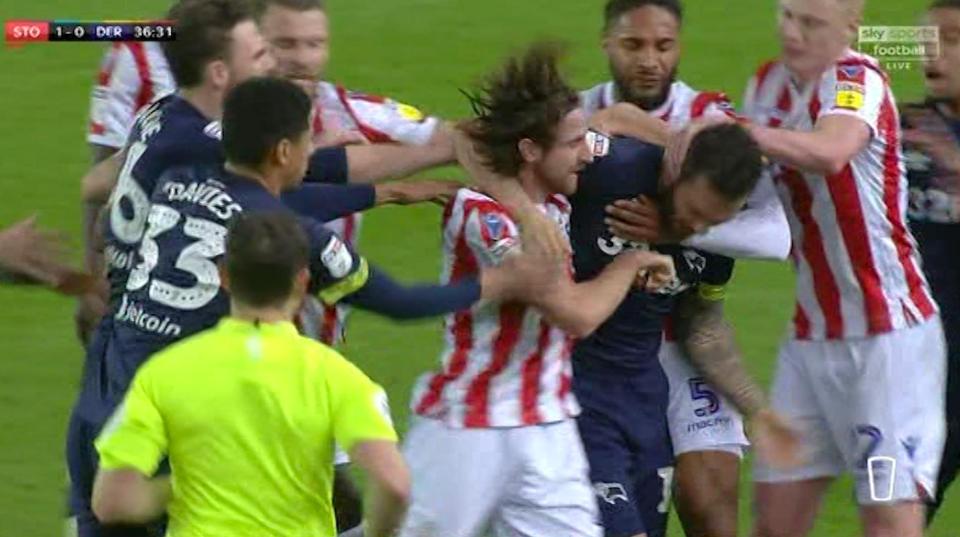 However, the Stoke star leapt to Johnson’s defence after the match.

Allen said: “People asked me at half-time what had happened and suggested I’d been bitten, but to clear it all up, that didn’t happen.

“He might have caught a bit of my shirt but I think we can lay that one to rest.”

Gary Rowett’s men emerged 2-1 victors despite having Etebo sent off before the break for his challenge on Keogh and are now up to 12th in the league table.

Rowett also played down the incident with Johnson after the game.

He said: “Someone said originally that Bradley had bit Joe, but I think Joe said it wasn’t too bad. Certainly we’re not going to have any complaints.

“I spoke to the referee, saying it’s not a problem and we don’t want anything further to be looked at. To me, it was just part of a melee.”

Leeds, Celtic and Arsenal linked with Premier League player ahead of January window

not a blue day

Lampard felt that the game was there for the taking when Stoke went down to 10 men, with Derby also losing Curtis Davies to an Achilles injury before half-time, with the defender stretchered off.

He said: “We are disappointed to lose a game against 10 men when you get yourself at 1-1. From there it is ours to win. The mistake gives them the second goal, then it is a difficult situation to break down 10 men behind the ball, so we’re disappointed.

“We could have done more in the last half an hour to get back and at least draw the game.

“Joe Allen and Gary Rowett just said there wasn’t much in it (the alleged incident), I haven’t seen it again, so I can’t give any information other than that.”