After two transfer windows of inactivity it looks like Tottenham Hotspur are about to get busy in the summer as they look to reach the next level.

Mauricio Pochettino has made it clear changes are needed if they are to truly compete for the Premier League title.

A recent dip in form following a gruelling mid-season stretch proves they don’t yet have the bodies to compete with Manchester City and Liverpool.

According to the Daily Mail, though, Spurs are keen on five players this summer, with a defender and a striker high on their wish list.

They will, though, be supplemented by outgoings with the club seemingly resigned to losing Toby Alderweireld for £25million due a clause activated when they triggered a year extension on his current deal.

It also seems Christian Eriksen could leave the club as he has just two years left on his contract and Real Madrid are reportedly keen on signing him.

Alternative Premier League table after 31 games, based on expected goals

Arsenal legend: 'I never would've celebrated if I scored against the Gunners'

But what would Mauricio Pochettino’s men look like if they were to land some of these stars?
Here talkSPORT.com takes a look at some options for Spurs next season.

Pochettino has been trying to hone his narrow midfield all season and it’s likely with some more tinkering we will see the Argentine adopt this formation, or a back three next year.
The addition of technically sound stars Carlos Soler and Jack Grealish will allow Spurs to progress the ball much better than they have been able to without Mousa Dembele, who left the club in January.

It would all allow Son and Kane to partner each other and, hopefully for Spurs fans, dovetail superbly. 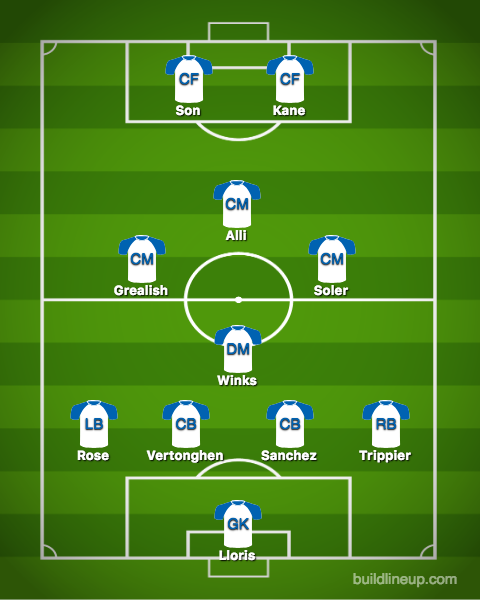 An unlikely formation for Pochettino but one which would allow him to get the best from Mitrovic, if he were to be signed in the summer.

You would likely see Harry Kane drop back towards a No.10 role, taking him away from stifling centre-backs and give him plenty of room to take pot-shots on goal from range.

Zaha and Heung-Min Son would provide the width, although the amount of protection they would give their full-back is certainly questionable.

A very similar formation to what Pochettino edges towards in most matches, he drifts between this and the 4-4-2 diamond, with a 4-3-3 allowing Alli and Son to get wide and see Grealish and Soler push forward with Winks dictating play behind them.

If Spurs are against tricky opponents, you could see Dier replace Winks, allowing him to drop between the two centre-back and push Trippier and Rose further forward as wing-backs. 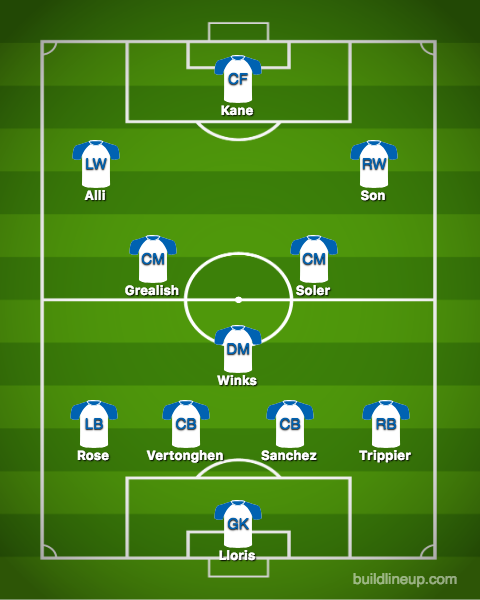 Many supporters believe this has been Spurs’ best formation in recent years with their ‘DESK’ front four (Dele, Eriksen, Son, and Kane) troubling most opponents.

Here we could see Championship ace Bowen come into the team, along with Grealish, who could drop deeper alongside Winks. 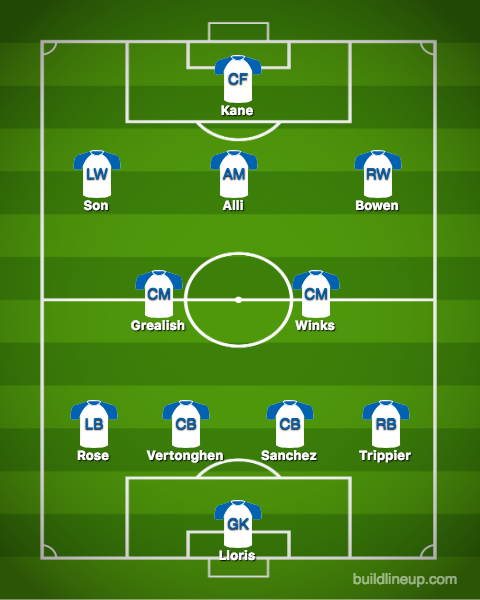 If Spurs opt to continue with a back-three without Alderweireld it’s likely – unless there are signings – we’ll see a lot more of Juan Foyth.

The youngster has shown plenty of potential this season and is far more progressive with the ball at his feet than Davinson Sanchez, who often errs on the side of caution.

With possible signings it’s only really Grealish who would make the team, lining up alongside Winks in central midfield, but a bench including just some of Mitrovic, Zaha, Bowen, and Soler would be a huge boost to the club.