Danny Murphy has suggested Aidy Boothroyd is the wrong man for the England Under-21s job, saying he was only appointed as manager due to his friendship with former FA chief Dan Ashworth.

Boothroyd’s future in charge of the Young Lions is in doubt after his side crashed out of the European U21 Championship after just two games. 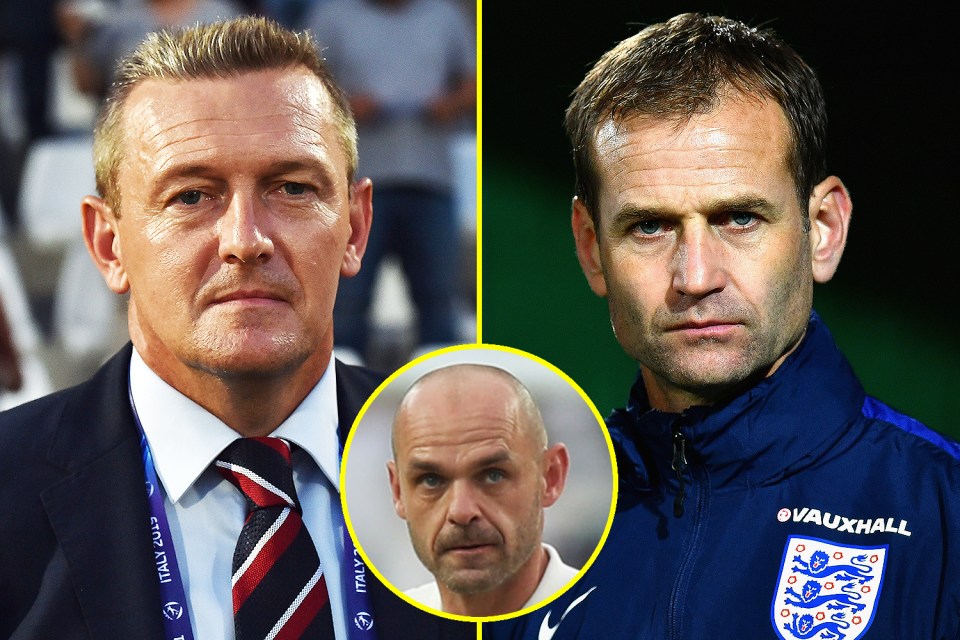 England were one of the big favourites to win the tournament, boasting players with Premier League and Championship experience, but they have failed to make it out of their group following error-strewn defeats to France and Romania.

Ashworth, now at Brighton, was director of elite development at the FA when ‘Hoofroyd’ – a nickname he earned for his tactics as Watford boss – was first appointed U21 boss in 2017, after Gareth Southgate was promoted to senior team manager.

The pair have a close relationship which goes back years – first working together at Peterborough 16 years ago and then again at West Brom, where Ashworth was Boothroyd’s assistant in their youth set-up.

Ashworth then took his friend’s job at the Hawthorns after Boothroyd left, eventually becoming the club’s technical director in 2007 before moving to the FA five years later.

In 2014, after being sacked by Northampton with the club at the bottom of League Two, Boothroyd followed the mate to the FA when he was appointed England U20s boss.

And Murphy believes the coach’s was not based on merit and that Boothroyd is not the right fit for the U21s job.

The former Liverpool midfielder told talkSPORT host Jim White: “Bothroyd got this job at a time when Northampton were bottom of the league when he left, and then he got into the England U20s, then the 19s and then U21s.

“He is supposed to be a decent guy, and this it’s not a personal thing, but for me his relationship with Dan Ashworth [is why he got the job].

“Did he get the job on merit? No, not really. There’s a bit of nepotism there and we have to be honest with that.

“His nickname when he left Watford was ‘Hoofroyd’ – his football philosophy is not what he’s trying to do with the U21s.

“If you’re trying to convince a group of players to play a certain way, when really you don’t want to play that way because nothing in your history as a manager suggests that’s your natural philosophy – that’s a problem.

“It’s because he’s working for the FA and they’ve told you to play that way.

“It’s not just about the tactics, though, it’s about the mentality of young players who are earning a lot of money and who are superstars and you need somebody in charge who understand that.

“I’m talking about the biggest picture, not this particular tournament.

“You’re talking about players responding to a coach, looking up to him, being inspired by him and being taught the right things.”

Les Ferdinand revealed he has rejected an interview for the chance to become the Football Association’s technical director.

The former Tottenham Hotspur and Newcastle United striker played for England on 17 occasions during his distinguished playing career.

However, he is currently impressing as director of football with Queens Park Rangers and duly turned the opportunity down.

It is understood Ferdinand was on a four-man shortlist to replace Dan Ashworth, who is leaving the post in 2019 to join Brighton and Hove Albion.

Speaking at a QPR fan forum on Thursday night, the 51-year-old said: “I spoke to them but it wasn’t time for me to leave this football club, I am happy to stay.”

Ferdinand has overseen an upturn in QPR’s fortunes after financial troubles in the wake of their relegation from the Premier League, and has put together – along with former England boss Steve McClaren – a side challenging for the Championship play-offs.

“To be honest, they (FA) contacted the club and asked to speak to me…it’s the national team,” Ferdinand added.

“I did speak to the FA and I made my views clear to them. I was flattered they wanted to speak to me because sometimes you read reports and they make you feel like you’re not doing a good job.

“But they’ve recognised what we’ve done at this football club.”

QPR chief executive Lee Hoos added he viewed the approach as a compliment.

Every Premier League club badge ranked: From worst to first

'NOT A GOOD LOOK'

Juventus' kit for next season leaks, but fans on Twitter are mortified

“The way we view it, we are flattered and honoured that they looked at this club,” he said.

“This is the national team, the fact that the FA is looking at people who work here shows we have people doing the right thing.”

Dan Ashworth has left his position as technical director of the Football Association.

The 47-year-old is to take up a similar role with Premier League club Brighton & Hove Albion.

Ashworth’s departure will come as a blow to the FA, as well as England boss Gareth Southgate, with whom he has worked closely alongside.

Having joined the governing body in 2012 as director of elite development, Ashworth was promoted to technical director three years later.

England have since had major success at youth level, with the Under-17 and Under-20 teams winning their respective World Cups, the Under-19s becoming European champions and the Under-21s reaching the semi-finals of the European Championship.

Ashworth’s reputation was further enhanced this summer when the senior team under Southgate reached the semi-finals of the World Cup.

Now he has decided to return to club football with Brighton, becoming their technical director with responsibility for their ‘ongoing football development’.

He will oversee the academy and medical departments at the Amex Stadium, as well as player recruitment at all levels, and will officially start work in the spring.

Ashworth held a similar role in the top-flight with West Brom before joining the FA.

A statement from chairman Tony Bloom read: “There is no doubting Dan’s standing within the game, and we are absolutely delighted that he will be joining us as our technical director.

“Dan’s CV speaks for itself, and while his work alongside Gareth Southgate, with England’s senior men’s team, was well documented last summer during the World Cup, it’s also worth highlighting his excellent work and successes across all the England men’s, women’s and junior teams.”

Dan Ashworth said, “I am delighted to be joining Brighton & Hove Albion, one of the country’s most progressive clubs. This is a huge opportunity for me and I have taken a lot of time to talk to Tony Bloom, Paul Barber and Chris Hughton before making the decision to make the move.

“I have thoroughly enjoyed my time at The Football Association, and I’d like to take this opportunity to thank the chairman Greg Clarke, CEO Martin Glenn, England managers Gareth Southgate and Phil Neville, as well as the coaches and staff at all levels who have supported me so well.

“The success we have had with our national teams is down to careful planning and high performance from the players, but also the hard work and professionalism of a lot of people over a sustained period of time, and of course the relationship we have had with the clubs, the leagues and the National Game. It’s been an honour and great pleasure to serve my country in the past half-decade.”

Phil Foden and ‘next Iniestas’, including Liverpool flop and Man United star