Leicester midfielder Dennis Praet has revealed he turned down a move to Arsenal during his teenage years – to instead focus on his education.

The 25-year-old was allegedly targeted by Arsenal earlier this year before joining the Foxes, and he’s now revealed he came close to signing for the Gunners while still a promising youngster ten years ago.

Aged 15, Praet was given a tour of Arsenal’s training ground by club legend Liam Brady, though he decided to turn down the chance of a move to north London.

“I had three or four really good options,” Praet told the Guardian. “We went to visit Arsenal, Lille, Ajax and Anderlecht.

Liverpool still five points clear: What happened in the Premier League on Saturday?

Sterling's passionate defence of Silva: 'I don't feel there's any racism in it'

“Arsenal would have been a really nice step and I could earn a lot more money there than in Anderlecht, but at that moment my education was not finished and that was really important for me – there was no insurance that I would become a good football player.”

Praet’s Leicester take on Newcastle in the Premier League today as they look to move up to third in the table.

He added: “When I heard about the interest from Leicester in me, it was important for me to see how they played because I didn’t know exactly.

“At that moment I was on the coach with Sampdoria, we were driving to a friendly game and I watched the second half of Leicester v Atalanta.

“I know Atalanta from Italy – they’re a really good team. But I was really surprised by the way Leicester were playing – with a really high press, really nice football, a lot of chances. At that moment I was sold.

“Of course after that, when it was really getting serious, I spoke with Youri about: ‘How is the gaffer? How is the training centre? How are the players?’ And he was so positive.”

The 28th Premier League season kicks off this weekend and with it come a new set of rules for fans to get accustomed to.

A big thing coming in for the 2019/20 campaign is Video Assistant Referee (VAR), giving match officials an opportunity to have another look at incidents during the game and even change their decisions – although they do have a three replay limit.

However, there are some more rule changes which you can see below as well as how they might affect teams for the upcoming season.

This rule has been brought in as a direct result of VAR.

A player is currently booked for any over-exuberant celebrations, jumping into the crowd or taking a shirt off.

But now it has been confirmed a player can even be booked if they score, celebrate in that fashion and the goal then gets disallowed off by VAR. 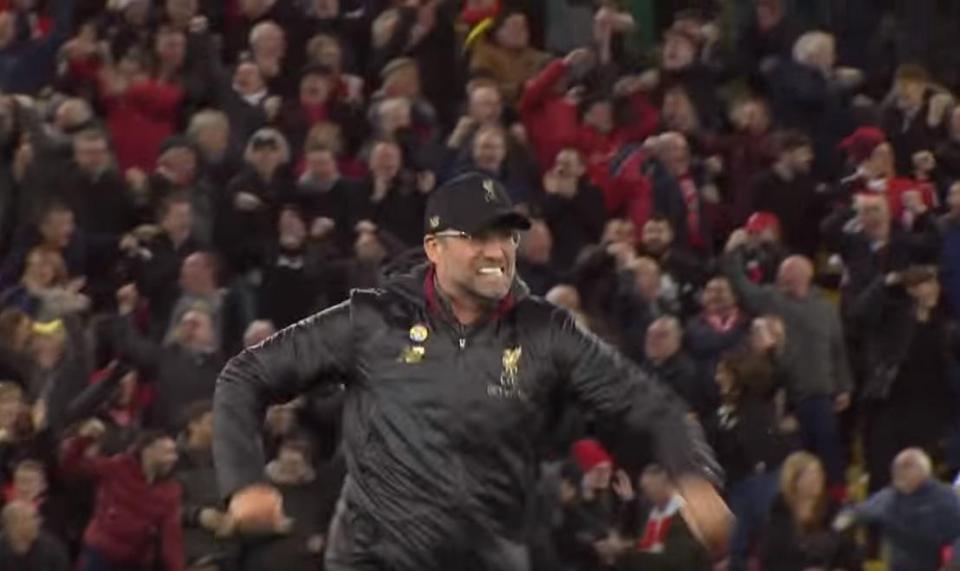 Liverpool boss Klopp was fined £8,000 by the Football Association for his over-exuberant celebrations during a victory over Everton last season

coc of the walk

How Harry Maguire compares to the world's best centre-backs

If the ball hits an attacker’s arm during the build-up to a goal it will be disallowed regardless if it was accidental or otherwise.

Manchester City striker Sergio Aguero scored a goal which rebounded off his arm against Arsenal to complete a hat-trick last season. He admitted it was a handball after the game but this season it won’t be given.

An attacking player is no longer allowed in the wall at free kicks and opponents must stand at least a metre away.

It means there will be a lot less jostling between attacking and defending players in the wall as a free-kick is being taken.

Goalkeepers must have one foot on the line while the penalty is being taken.

Meanwhile, the authorities have decided to reduce the mind games by keepers by banning them from touching the posts before the spot-kick is taken.

Managerial staff will now be punished the same way as players with referees allowed to brandish yellow and red cards to those on the touchline.

This is a rule the likes of Tottenham boss Mauricio Pochettino will need to take into account.

Following a defeat to Burnley last season, Pochettino angrily confronted referee Mike Dean on the pitch, along with assistant Jesus Perez – actions that could see them carded in the future as well as receiving a fine and a touchline ban.

It will take four cautions to receive a one match ban, while eight yellows will make earn you a further two games away from the pitch.

You may have seen Pep Guardiola get one in the Community Shield too.

The ball is now active the second it leaves the goalkeeper’s foot in a goal-kick situation.

Teammates of the keeper or attackers from the opposition no longer have to wait until the ball leaves the penalty area to take control of it.

However, Portuguese club Benfica appear to have taken advantage of the rule change during a pre-season match against AC Milan by chipping the ball into a defender inside their own area who then gives it back to the goalkeeper.

This opens up an opportunity for the keeper to then drop kick the ball or even throw it out of his box.

Old fashioned drop balls will not be used any more and now referees will be giving the ball back to the last team in possession after stoppages.

Whenever a player is substituted, they must exit the field at the nearest point.

This has been introduced to stop players on the opposite side of the pitch walking to the far dugout late on in games.

Although this was during the Carabao Cup final, it may be easier for to take Kepa Arrizabalaga off if Chelsea want to bring on Willy Caballero with this new rule in mind.

If two teams are level on points, goal difference, goals for and goals against, then their place in the table will be determined by their head-to-head record.

In the past, it would have resulted in a play-off between the two sides, something that has never happened before.

There was talk of Manchester City and Liverpool having to play a title play-off after the final day but it wasn’t required as the Citizens ended up finishing a point above the Reds.

Saturday is GameDay on talkSPORT and talkSPORT 2 as we become your go to destination for all the Premier League action.

We’ll bring you LIVE commentary of Premier League games across all three time slots on Saturday – 12.30pm, 3pm and 5.30pm – delivering award-winning coverage to more GameDay listeners than ever.

Arsenal are back in talks with Celtic over a deal for Kieran Tierney.

The Gunners have had two bids rejected for the 22-year-old full-back, with the latest potentially worth up to £25million.

The Gunners are understood to have met Celtic’s asking price of £25million but the Hoops want the money up front, as opposed to the staggered payments initially offered.

Arsenal cooled their interest but after sealing the signings of Dani Ceballos, on loan from Real Madrid, and William Saliba from Saint Etienne for £27million, they have now made a new move to secure Tierney’s signature.

Gunners chiefs are believed to be confident of finalising an agreement with Celtic, with talkSPORT told on Thursday that ‘it looks like Tierney will be on his way to the Emirates’.

Most Read in Sport

Dillian Whyte tests positive for banned substance - What do we know so far?

Tierney is one of Unai Emery’s key targets this summer.

The left-back has made 170 appearances for Celtic and has also been attracting interest from Napoli.