The 4-1 chance, ridden by the experienced Davy Russell, surged clear of the rest of the field late on. 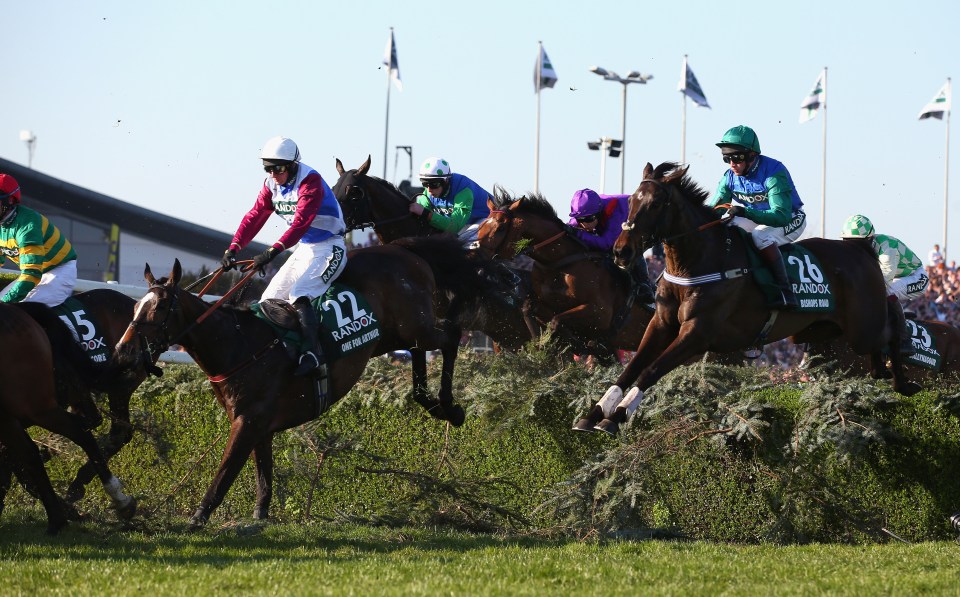 Liverpool legend John Barnes has explained how he injured himself in bizarre and hilarious circumstances on a team trip to the Grand National at Aintree – and how he escaped the wrath of Kenny Dalglish.

The 2019 Grand National weekend is upon us, and it appears Barnes has some fond memories of the legendary Merseyside race.

But it wasn’t horses he can remember galloping down the final furlong – it was him and fellow Anfield great Alan ‘Jockey’ Hansen!

Some footballers just can’t turn off their competitive edge, which is clear from this story.

It all started when long-legged Hansen insisted he could beat winger Barnes in a foot race and –  after enjoying some ‘hospitality’ – where else to prove it than on the final furlong of the Grand National course?

It didn’t all go to plan for Barnes, though, as he explained on Friday’s Sports Breakfast…

“I gave Alan Hansen five yards and he beat me by ten, because unfortunately I pulled my hamstring.

“I missed three games after that!

How Benfica would look if they kept their best players, including Man United star

Morelos and red cards, Messi and Ronaldo and other iconic football duos

“Of course I expected a rollicking from Kenny Dalglish, but Kenny actually showed me a lot of sympathy.

“Kenny had a bet on Jockey winning anyway, so I don’t think he was too bothered about me missing those three games.

“I didn’t know money was on it until Kenny was quite pleased. Having lost me for three games I thought he’d be disappointed, but he wasn’t disappointed at all!

Listen to John Barnes on the Alan Brazil Sports Breakfast IN FULL above!

Warm-Up tomorrow at 11am

Plus across our social media pic.twitter.com/sQA60RGL1S

If you’re wondering who to bet on in the Grand National on Saturday, then read on.

A Toi Phil, with odds at 100/1, has the best chance of winning the £561,000 cash prize at Aintree Racecourse, according to grandnational.org.uk.

In research ahead of the big day, it has found statistics about the winning horses since the first ever race at Aintree in 1839 and here’s what you need to know.

And A Toi Phil perfectly matches the best age and handicap and most closely resembles the average Grand National winner.

SHOW ME THE MONEY

With a £1million prize haul, it pays out even on the 10th-placed horse

With current odds at 100/1 to win, the French stallion could make some punters’ day if he wins.

Grand National preview: talkSPORT’s Lee McKenzie reveals who he is backing along with our other racing experts

A grandnational.org.uk spokesman said: “Research shows historically that, nine-year-old horses with a 10st 7lbs race best, so this makes A Toi Phil an interesting shout for punters, despite the bookies rating the horse at 100/1.

“If you’re making a wager on this year’s Grand National, it’s worth considering the historical data as inspiration for a cheeky flutter.”

All you need to know about the Grand National

The race starts at 5.15pm on Saturday 6 April and it’s live in full on talkSPORT 2.

The 2019 Grand National takes place at Aintree today and talkSPORT will have full coverage of it all.

Last year’s winner Tiger Roll has been the favourite going into the 172nd edition of the historic showpiece steeplechase.

There will be 40 runners in the field once again all looking to etch their names into the history books alongside the likes of Red Rum and the other champions.

talkSPORT will be with you for every stride of the famous old race and here’s how you can tune in.

When is the Grand National, when does it start and who should I bet on?

Michael Owen explains why his horses are like Premier League players

Grand National preview, including tips for biggest racing day of the year

Grand National 2019: How to listen

talkSPORT 2 will bring you five races on each day of the festival.

We will then have full, uninterrupted commentary of the Grand National on Saturday afternoon from 5pm on talkSPORT 2.

The closing stages of the race will also be on talkSPORT prior to our coverage of the FA Cup semi-final between Manchester City and Brighton.

talkSPORT will be live from Aintree all day, with the Warm Up with Mike Parry and Danny Kelly coming live from the course at 11am.

You can also listen through the talkSPORT App, on DAB Digital Radio or on MW 1053 or 1089.

For more information about how to listen LIVE on talkSPORT click here.

Grand National 2019: When is it and where

The Grand National will get underway at 5:15pm on Saturday April 6 and is being held at Aintree Racecourse near Liverpool.

The handicap steeplechase race has 30 fences to be jumped including Becher’s Brook, The Chair and Canal Turn, and is run over a distance of 4 miles and 514 yards.

Grand National 2019: The runners and odds

British racehorses are cared for in the same way Premier League clubs look after their players.

As racing fans get ready for the Grand National, Owen is helping a campaign called the Horse Comes First which aims to demonstrate that the racing industry always strives to ensure horses are well looked after.

The former striker fronted a film where he shows fans around his Manor House Stables in order to highlight the first class treatment his horse get – they even have a spa and swimming pool!

“The resemblance between race horses and footballers is uncanny, and the treatment and care they receive is a similar standard to what I was used to throughout my playing career, he told the British Horseracing Authority.

“Our trainers dedicate their lives to the horses and understand that each one is different and needs a certain level of special care. They know more than anyone that the animals are athletes, and they are treated as so.

“At Manor House Stables we aim to prevent the injuries before they arise, and make sure our facilities stay world class to help keep our horses happy and premier league fit.”

The Grand National, more than any other horse race in Britain, has a magical appeal that stretches way beyond the sport’s regular fans. Every year, for ten minutes, millions become hooked on the spectacle of 40 horses jumping 30 unique obstacles – with famous names like Becher’s Brook, the Canal Turn, The Chair and Valentine’s – at Aintree racecourse in the suburbs of Liverpool.

The 2019 National is live on talkSPORT and talkSPORT2, along with commentary on many of the other top races during each of the three days. The quality of the racing throughout the meeting is top-class, with many horses heading to Aintree after running at the Cheltenham Festival the previous month.

However, the Grand National is the star attraction, and this year there’s huge interest in whether or not the 2018 winner Tiger Roll will become the first horse since the legendary triple winner Red Rum (in the mid-1970s) to land the race more than once.

Tiger Roll warmed up for the National with a spectacular 22-length win at Cheltenham and has since become a short-priced favourite to achieve the double. One of the smallest steeplechasers in training, he’ll be carrying a bigger weight this year, but he’s tough and versatile and has a sporting chance of pulling it off.

Another Irish runner, Rathvinden, could go off second-favourite – he has stamina and class; while Anibale Fly is the highest-rated runner in the race, having been placed twice in the Cheltenham Gold Cup and fourth in last year’s National. He should go well again but has a big weight to carry. Last year’s runner-up Pleasant Company will be having another crack; and Vintage Clouds is a game galloper, as he showed when finishing second at Cheltenham.

Rock The Kasbah will be a popular choice as he attempts to give champion jockey Richard Johnson his first winner in the race; Walk In The Mill put in a fine round of jumping to win a shorter race over the Grand National fences in December; and Joe Farrell demonstrated his ability to stay long distances by winning last season’s Scottish National at Ayr.

For me it’s RATHVINDEN, with REGAL ENCORE as a fun outsider – he’s unpredictable but completed the course in 2017 and can improve on that. But with recent winners at 66-1, 33-1 (twice) and 25-1 (twice), the Grand National remains a thrilling occasion in which nothing can be taken for granted.

Tanya Stevenson (talkSPORT2’s daily round-up at 6.40am): WALK IN THE MILL

The Grand National is upon us. It’s an institution on these shores and talkSPORT will be at the heart of the most famous national hunt race.

First run at Aintree in 1839, the it was won by Lottery and Captain Becher fell at the fence now known as Becher’s Brook.

The list of legends has grown since then, with Red Rum, Ruby Walsh and Jenny Pitman have become household names.

What is the Grand National?

It’s a National Hunt race held every year at Aintree. Raced over a course of four miles, 514 yards, a maximum field of 40 horses attempt to clear 30 fences in pursuit of glory.

The race starts at 5.15pm on Saturday 6 April and it’s live in full on talkSPORT 2.

The closing stages of the race will also be on talkSPORT ahead of the FA Cup semi-final between Manchester City and Brighton at 5.30pm.

In fact, talkSPORT will be live from Aintree all day, with the Warm Up coming live from the course at 11am

How much prize money does the winner take home?

SHOW ME THE MONEY

With a £1million prize haul, it pays out even on the 10th-placed horse

Who are the runners and riders?

The 40 runners have now been released. 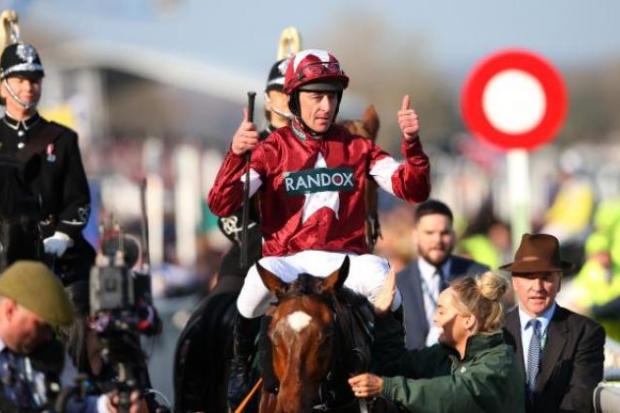 The final field for the 2019 Grand National has been confirmed

Who shall I bet on?

In his preview, talkSPORT’s Lee McKenzie has revealed who he is backing, along with our other racing experts.

Has it always been at Aintree?

Except during the wars. Aintree was taken over by the army during the World War I, with it being staged at Gatwick, on the site of what is now the airport. The National was staged at Aintree in 1940 but the Second World War stopped the race between 1941 and 1945, with Aintree again commandeered by the army.

There is also much debate about when the first Grand National was actually held. Some say the first was 1836, won by The Duke and ridden by Martin Becher. However, it was staged at Maghul and the race has become a public institution since being first held at Aintree in 1839.