Celtic have been handed a blow in their bid to win a eighth successive Scottish Premiership title.

Manager Brendan Rodgers left the club to take charge of Premier League side Leicester City but can interim boss Neil Lennon get them home ahead of Rangers?

It promises to be a fascinating end to the campaign as Steven Gerrard, in his debut season, puts their rivals under pressure, while at the other end of the table Hamilton Academical, St Mirren, and Dundee are all fighting to avoid relegation.

Outcry as independent league forced out 'by FA'

Manchester City under investigation for potential breaches of FFP regulations

The two Glasgow sides were in action in the Scottish Premiership on Sunday.

Below you can see the best of the action.

It was a wonderful night in the Europa League for Celtic on Thursday but they went back to reality after losing 2-0 at Neil Lennon’s Hibernian.

Midfielder Vykintas Slivka got the home side off to a dream start when he finished off a fine move with just 46 seconds played and in the 59th minute striker Florian Kamberi hammered in a clinching second.

This was Celtic’s first league defeat in ten matches and they were unable to overtake table-toppers at the time Kilmarnock with the result.

Rangers took full advantage of their rivals’ slip-up to return to the top of the table as Daniel Candeias’ early strike was enough to secure a 1-0 win over Hamilton at Ibrox.

Steven Gerrard’s side moved to the front of the pack with victory over Hearts a fortnight ago but then relinquished the lead with stumbles against Aberdeen and Dundee.

'Move him on, it's no big deal' - Roy Keane reacts to Paul Pogba's United snub

Patrick Vieira admits he would 'slam Mario Balotelli against a wall'

They now lead Kilmarnock on goal difference while the Hoops sit a point back in third with a game in hand.

Accies remain 10th, four points above the drop zone, but victory was the perfect response for Gerrard’s men to Thursday’s Europa League exit at the hands of Rapid Vienna.

The Scottish Premiership is proving to be an exceptionally competitive league and it’s set to get even more interesting as the campaign goes on.

Celtic currently lead but the top six are only separated by five points, with Rangers among the chasing pack, which include St Johnstone, who are on a five-game winning run. 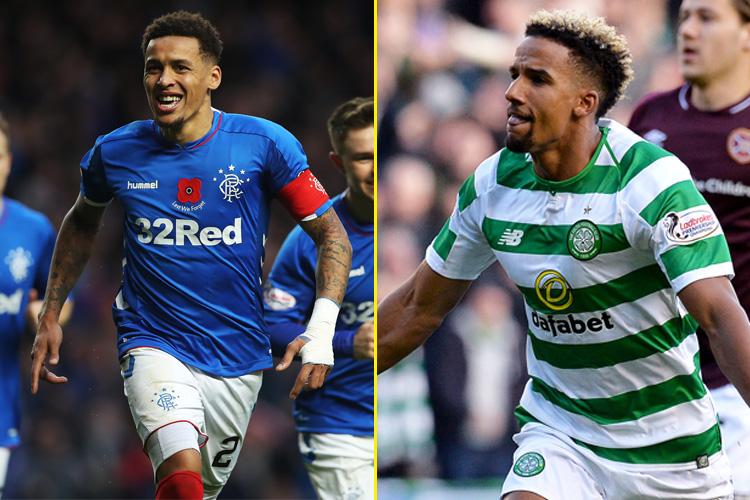 Meanwhile, at the other end of the table, Dundee and St Mirren prop up the table and are the likely relegation candidates right now.

With a week off from Scottish top-flight action due to the international break, we have fired up the famous talkSPORT.com super computer to predict the final league standings.

don't give a damn

Luka Modric: 'If I don't win the Ballon D'Or, nothing will change'

Unpopular figure at Parkhead Dedryck Boyata redeemed himself among Celtic fans as he scored the only goal of the game in his side’s Scottish Premiership win at home to Hamilton.

The Belgian made a return to the team after his controversial decision to not play in Celtic’s recent Champions League exit against AEK Athens – he said he was injured while boss Brendan Rodgers disagreed.

The 27-year-old provided some early pantomime with some fans booing and others cheering, while a derogatory banner was held aloft before the game.

But in the 63rd minute there was only green and white joy when he knocked in from close range.

Although uncertainty remains over Boyata’s future, it was an important contribution to Celtic who face two more crucial home matches next week, the second leg of their Europa League play-off with Suduva – the tie is poised at 1-1 – and the first Old Firm game of the season against Rangers.

Boyata had come out to see a banner held up among the ultras group, The Green Brigade, which read, ‘Boyata – not fit to wear the jersey’ and there was a mixed reception to his early touches before the supporters turned their attention to winning three points, which proved more problematic than envisaged.

Chelsea fans on Twitter: 'They're trying to kill Eden Hazard'

The visitors, with Delphin Tshiembe, Dougie Imrie and Steven Boyd reinstated, almost surprised Celtic before a minute had elapsed when striker Mikel Miller burst into the box before his drive was pushed past the post by keeper Craig Gordon, the corner coming to nothing.

The champions asserted themselves and dominated possession amid a subdued atmosphere.

In the 15th minute Accies keeper Gary Woods touched James Forrest’s curler from the edge of the box on to the post to concede a corner which Mikael Lustig flicked past the near post.

Hamilton remained disciplined and diligent in their defending but escaped just before the break when Moussa Dembele headed a Forrest cross past the far post, the French striker then skimming the bar with a 25-yard curler right on half-time.

The second half continued along the same lines with Celtic huffing and puffing and Hamilton offering little in an attacking sense.

Callum McGregor and Dembele both missed the target after being set up by the marauding left-back Kieran Tierney.

Accies tired and dropped deeper and after Dembele headed a Lustig cross over the bar from six yards, they were eventually undone.

A Leigh Griffiths corner from the left was helped on by Dembele and when Lustig headed back across goal Boyata was on hand to force the ball over the line.

His next touch brought cheers and indeed he should have scored a second in the 77th minute when he scooped over the bar from 12 yards after the Accies defence got tangled up, but ultimately his earlier goal proved enough to secure the win.

Victory for Celtic sees them rise to second in the league, above Rangers who could only manage a draw at Motherwell.