As a Barcelona player he graced the biggest stadiums in football, but it was in England where Bulgaria’s greatest player enjoyed one of his biggest successes.

He was part of the 1992 ‘Dream Team’ that won Barca their first ever European Cup – the season before it was re-branded as the Champions League – by beating Sampdoria 1-0 on the hallowed old turf and Stoichkov toasts the win every year.

“For Barcelona it was a huge success just to get there, because those were the days of the European Cup and there was more emphasis on the concept of the knockout tie than today’s [Champions League] group stage.

West Ham eye deal for Juve outcast, Man City star could be out until Christmas

“This triumph was the start of the greatest years of my career. I was voted European Player of the Year in 1994, the same year that I was a World Cup semi-finalist with Bulgaria.

“But the European Cup victory in 1992 at Wembley felt fantastic, we were making history, celebrating Barcelonismo. That’s why I still have a replica of the European Cup in my house and I wake up to it every day. I’ll never forget Wembley.”

And Lionel Messi and co. remain indebted to Stoichkov and manager Johan Cruyff for getting the ball rolling in terms of Champions League success.

Speaking in Barcelona’s Camp Nou, he added: “I think 20 May should be here, wherever they record the titles at the stadium, and it should be in gold!

“After that one, you can win 20 if you want, but the first one is always there.” 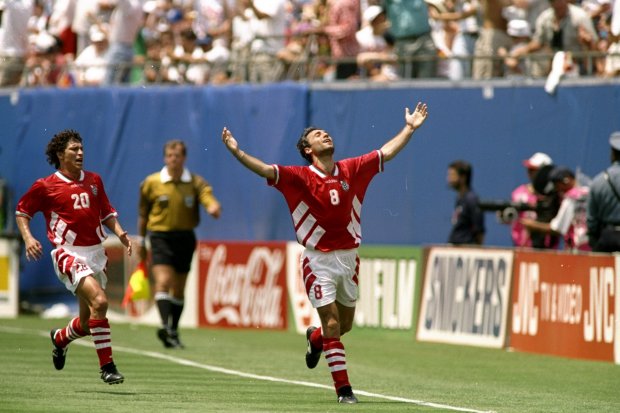 Bulgaria had never won a World Cup game heading into the 1994 edition, then Stoickov showed up...

He was the fiery, filthy-tempered finisher, who also happened to be Bulgaria’s star at USA ’94. He scored crucial goals against Argentina, Mexico and a pinged free-kick against Germany to help his side all the way to the semi-finals. He top scored with six goals, but had to share the Golden Boot with Oleg Salenko – a fact he’s probably still furious about.

On this day in 1994, Hristo Stoichkov scored this free-kick vs Germany. pic.twitter.com/p6XDgLTKWa

Sir Alex Ferguson knows all about facing one of the most dangerous players of the 1990s, who partnered Brazil icon Romario at Barcelona to devastating effect.

“We have been well and truly slaughtered,” he said after watching Barcelona tear Manchester United to shreds in a 1994 Champions League group game where Stoichkov scored twice.

“It was a humbling experience for us. We couldn’t handle the speed of Stoichkov and Romario. The suddenness with which they attacked was a new experience.”