England have reached the quarter-finals of the Women’s World Cup after beating Cameroon 3-0 in their last-16 match in Valenciennes.

On a sweltering hot day, tempers were frayed and emotions ran high after a series of contentious calls marred the action on the pitch.

Phil Neville’s side will now face Norway following a remarkable, ill-tempered clash in the north of France.

The Lionesses went ahead in the 14th minute at the Stade du Hainaut when Cameroon were deemed guilty of a back pass and, from the resulting indirect free-kick, Toni Duggan teed up a strike by England captain Steph Houghton.

Extraordinary scenes then followed as Cameroon made their displeasure known about two VAR decisions that went against them.

After Ellen White’s finish in first-half stoppage time was ruled out for offside and the decision was subsequently overturned, Cameroon’s players remonstrated at length with the officials and there appeared some doubt over whether they would resume playing.

Their anger then increased shortly after the interval when Ajara Nchout fired the ball into England’s net and a VAR review saw that effort chalked off for offside. The game was held up once more as Cameroon made further angry protests, with Nchout in tears.

England survived some scares soon after, then extended their advantage in the 59th minute through Alex Greenwood’s finish, before referee Qin Liang made another VAR check following a Ysis Sonkeng challenge on Fran Kirby, with no penalty being given.

Having come through a test that also saw them receive some rough treatment and Duggan being spat on, England will now face Norway on Thursday in Le Havre for a place in the semi-finals.

The Women’s World Cup last-15 clash between the two nations started off in a robust manner, with Lyon striker Nikita Parris taking an elbow to the jaw.

The referee refused to use VAR however, and only awarded a yellow card to Yvonne Leuko.

Besides that… this is worth more than a yellow, surely?

But the biggest talking point of the first half in Valenciennes occurred when Augustine Ejangue played a deliberate backpass to Annette Ngo Ndom.

As chaos ensued in the box, cameras caught Ejangue appearing to spit onto Duggan’s arm, much to the chagrin of the Barcelona striker.

Despite the 27-year-old’s protestations, the referee again did nothing and the incident went unpunished.

While it is not clear whether or not the incident was intentional, it certainly provoked an angry reaction from fans online, who vented their rage on social media.

20 minutes in and we’ve had an England goal, an elbow to the face and also this

What is the point of VAR if you can spit on an opponent, it be caught on video, and nobody does anything? pic.twitter.com/cnL1FWn6XG

Okay wait. Did she just spit on her?

Not sure that back pass was intentional, so a bit harsh on Cameroon. What isn’t harsh is that they could easily be down to 9 players. VAR not used on the elbow to the face and spitting at Duggan. Hmm.

The free-kick right on the six-yardline. Cameroon's wall bang on the goal line.

Replays being shown which appear to show Duggan being spat on.

This Cameroon side are an absolute disgrace to football. Elbows in faces, England players being spat on, late challenges… it’s disgusting. #Lionesses  #ENGCAM #FifaWWC

England’s World Cup campaign gets underway against Scotland on Sunday, LIVE on talkSPORT.

The Lionesses came third in the 2015 tournament losing to Japan in the semi-final before beating Germany in a play-off.

Former Manchester United defender Phil Neville will be hoping to add more silverware to England’s cabinet after guiding his side to a SheBelieves Cup triumph in March.

England and Scotland last met at Euro 2017 when the Lionesses thrashed the Scots 6-0 in Holland.

But England midfielder Scott Jill admits they were facing an inexperienced Scotland side two years ago.

She said: “For us, it’s one of the biggest games of our lives.

“I think what’s important is we don’t get lost in the emotion of the occasion and we just stay logical, earn the right to play.

“I haven’t even thought about that [6-0 win], which probably shows how I think this game’s going to be completely different.

“At that time, Scotland had some fantastic players but they probably didn’t have the experience that they’ve got now. 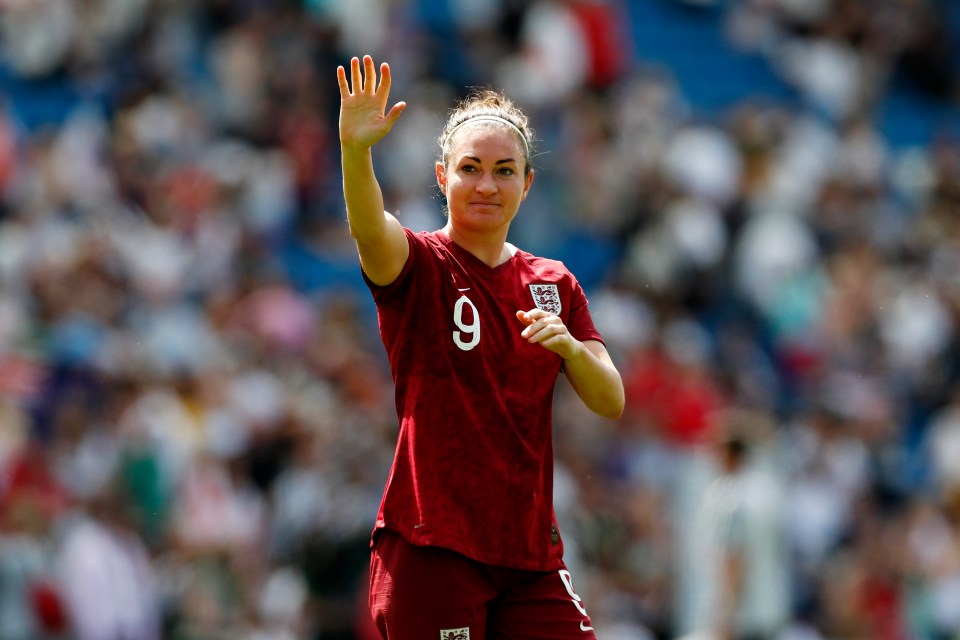 “I definitely think it will be a much tighter affair than the one before. We need to do our best to find time to [block] out all that noise that’s going to be outside.”

England No.1 Carly Telford is expected to start in goal with a back-four of Lucy Bronze, captain Steph Houghton, Leah Williamson, Alex Greenwood in front of her.

In pre-tournament friendlies, Neville used a 4-3-3 and 4-2-3-1 formation against Denmark and New Zealand, respectively.

He could turn to experience for the Scotland clash with 136-capped Jill Scott anchoring the midfield with energetic duo Jade Moore and Keira Walsh playing slightly further ahead.

England have never lost a game that Taylor, 33, has scored in.

Toni Duggan wants the Lionesses to be criticised in the same way the men are – stressing equal treatment must be in motion across the board.

Speaking ahead of the start of the Women’s World Cup, the Barcelona forward has admitted she’s found encouraging remarks after international defeats a ‘bit patronising’ – and insists if it was the other way round the men’s team would be getting plenty of stick.

“In the past, we might have lost a game and you get fans messaging you saying, ‘Ah, don’t worry, you’ve done so well’ and it can be a bit patronising,” Duggan told the Times.

MOST READ IN FOOTBALL

England vs Netherlands updates: Nations League clash to go ahead despite heavy rain

Duggan, 27, also wants to see a more raucous atmosphere around grounds when women are competing in this country, citing her contrasting experiences of playing in showpiece finals in both England and Spain.

“I played at the Wanda [Metropolitano in March] with 60,000 people for Barcelona against Atletico Madrid and we broke the record for attendance at a women’s game,” Duggan explained.

“There’s a picture of me celebrating and behind me there’s a man putting one finger up.

talkSPORT will have live coverage of every single England and Scotland World Cup game across the talkSPORT network.

“I’m not promoting that or saying it’s a good thing, but it showed what it meant.

“There are some things in the men’s game we don’t want — but it felt like a proper atmosphere.”

If you want to know all about the lifestyles of the rich and famous footballers a new app called OTRO has promised to give you access to the latest news and more about 17 superstars past and present including Lionel Messi, Luis Suarez, and Neymar.

The new platform, which has earned comparisons with Spotify, offers supporters across the globe an unprecedented view into their heroes’ lives thank to videos, photos, and more, in nine languages across 200 countries.

Whether you want to get Benjamin Mendy’s incredible social posts in one place, a documentary on Luis Suarez’s shooting skills, or an insight into the family who have inspired England striker Toni Duggan you can get it all on OTRO – ‘Our Other Club’.

Superstars are also getting involved with fun challenges, including a slot-car race and much more as the 23 Capital funded venture looks to capture the attention of fans around the world.

It is a premium service, costing users £3.99 a month, which also offers content like exclusive interviews, live Q&As, documentaries, and live chats.

You can, though, sign up for free but will only get the basics from OTRO – and who wants to miss out on Zizou’s latest holiday snaps before he inevitably takes the Manchester United job from Jose Mourinho?

Our Other Club’s attempt to give a behind the scenes glance at the world’s top superstars, and Romelu Lukaku, is certain to attract plenty of attention but it’s pay model is likely to put off most casual users.

But more current and former stars are likely to join their cast in the coming weeks and months with plenty exclusive stories and interview to keep the content rolling out.

Jeremy Dale, CEO of OTRO, explained the move: “Football fans all over the world want a deeper connection with their heroes and this is where OTRO comes in. Our line-up of players is beyond even my wildest dreams and I know that fans are going to love them coming together to form one club where they share their stories.

“We’ve specifically designed OTRO to be a community where members and players engage directly. These players are the founding members of OTRO and they are now inviting their fans to join their other club.”

He added: “There’s billions of people on the planet who love football, and there are billions of people who love their heroes from the football world. People see what the footballers do from about 20 different camera angles while they’re on the pitch, but they don’t really know who they are as people. So what we want to show is the other side of those players’ lives.

“So OTRO means ‘other’, and this is their ‘other club’. They may play for Paris Saint-Germain or Manchester City or Barcelona or whatever team you want to talk about, but this is their other club. They’ve all come together to create this club for their fans, and it’s a club where they show their other side, so that’s what we’re trying to do.”