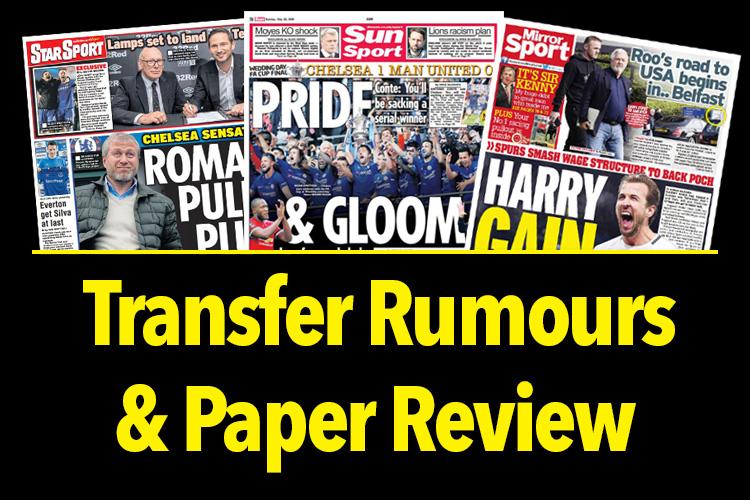 Real Madrid are back in the hunt for Raheem Sterling, and are planning to make a move for the Manchester City forward NEXT summer – FULL STORY

It is claimed Manchester United players and staff believe Jose Mourinho is one defeat away from losing his job as manager. (Daily Mail)

United’s players are said to have been left confused by the Special One’s recent tactics and team selections. (The Sun)

Barcelona have ruled out the signing of Man United star Paul Pogba this summer, but still want to buy a central midfielder before their transfer window closes on Wednesday. (Sport)

Arsenal striker Alexandre is considering his future at the Emirates Stadium, fearing he does not fit in with the style of play of new boss Unai Emery, according to reports from his native France. (le10sport)

The Gunners will let highly-rated starlet Reiss Nelson, 18, move on loan to German side Hoffenheim for the season, as the attacking midfielder looks to get more first-team football – FULL STORY

Meanwhile, Liverpool will allow 21-year-old winger Sheyi Ojo to leave Anfield on loan to French club Reims. The England Under-21 international has previously had loan spells at Fulham, Wigan and Wolves. (Daily Mirror)

Barcelona defender Gerard Pique has said he will never return to Manchester United. The Spaniard left Old Trafford for the Nou Camp in 2008. (Daily Star)

Former Manchester City star Yaya Toure is close to signing for a new club, with his agent revealing the 35-year-old has ‘passed a medical in London’. (Dimitry Seluk on Twitter)

Everton striker flop Sandro Ramirez could seal a move back to Spain with Real Sociedad before the summer transfer window closes, according to reports from his homeland. (Marca)

Alisson was not Liverpool's first-choice target as interest revealed

Real Sociedad enter race for out of favour Everton striker

Mark Warburton reveals he learned of his Rangers sacking on TV

Jan Oblak was Liverpool’s first-choice goalkeeper in the summer, not Alisson