Leeds United are in talks to sign Izzy Brown from Chelsea before the loan window closes on Friday.

Brown, the England youth forward, has flown to Leeds Bradford Airport to finalise the terms of his move, with reports saying it is close to completion.

The 21-year-old has visited Leeds‘ Elland Road home before, having spent time on loan in the Championship with the club’s Yorkshire rivals Rotherham and Huddersfield.

And in fact, while playing for the former, Brown was certainly impressed by the Leeds support when he visited the famous stadium.

Tottenham stadium update: All Spurs’ Champions League group games could be at Wembley

When is the Champions League group stage draw, and how can I follow it?

Rotherham were soundly beaten 3-0 when they played Leeds at Elland Road on January 2, 2017, with Brown playing the full 90 minutes for the visitors.

After the Yorkshire derby ended, the youngster took to Twitter to react to the result, admitting the atmosphere was something he had never experienced before, 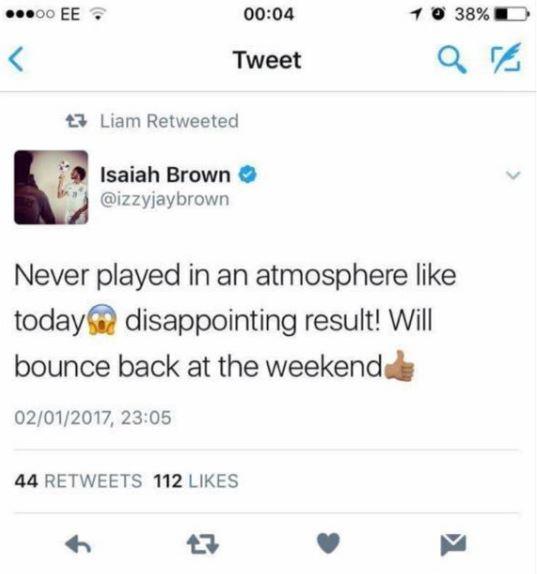 A few weeks later Brown actually scored against Leeds, this time playing for Huddersfield, though it was at the Terriers’ John Smith’s Stadium – not Elland Road.

Marcelo Bielsa has already overseen the signing of two players from Chelsea this summer, bringing in Jamal Blackman, the goalkeeper, and midfielder Lewis Baker, both on season-long loan deals.

Brown is expected to be Leeds’ final signing before the loan window closes for Football League clubs at 5pm on Friday, August 31.